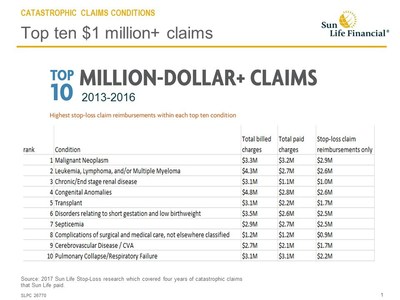 "Health insurance is for the unexpected. Providing full coverage for catastrophic medical events without lifetime limits as designed under the Affordable Care Act is the right thing to do," said Dan Fishbein, M.D., president of Sun Life Financial U.S.  "An unintended result of removing caps under employer plans has been a steady rise in the frequency of multi-million-dollar claims fueled by life-saving treatments and drugs. While this benefits all of us, the overall increase in health care costs underscores the need for self-insured employers to plan for and manage catastrophic, high-cost claims so they can continue offering affordable health benefits to their employees."

The 2017 Sun Life Stop-Loss Research Report is composed of data from high-cost medical claims during the study period. The report is the first in a series of four that will become available through the remainder of the year. The next report, due later this summer, will cover high-cost medications.

Sun Life is the top independent stop-loss insurer in the U.S., and has been reporting on catastrophic claims annually since 2012 on claims data dating back to 2008.

In the United States, Sun Life Financial is one of the largest group benefits providers, serving more than 60,000 employers in small, medium and large workplaces across the country. Sun Life's broad portfolio of products and services in the U.S. includes Disability and Absence Management, Life, Dental and Vision, Voluntary and Stop-Loss insurance. This includes the acquisition of the U.S. Employee Benefits business of Assurant, Inc., in Q1 2016. For more information, please visit www.sunlife.com/us.

To view the original version on PR Newswire, visit:http://www.prnewswire.com/news-releases/multi-million-dollar-medical-cases-increased-68-over-past-four-years-sun-life-report-300468634.html

You are about to be redirected to a page that is not optimized for this device.